1. “I’m not psychotic, it’s the side effects of my medications” takes on new meaning inside a psychiatric ward.
Although the summer months were filled with food, family, friends, and general fun frenzy, my main goal in July was the completion of my nursing practice, a required summer clinical rotation to expose us to patient care.  The speciality and location were up to us, as long as it took place in a teaching hospital, and I was fortunate to find a spot in a psychiatry department in Frankfurt. I hoped to get a better feel for the field of psychiatry, as well as glimpse what the health care system in Germany is like.

I learned the names of medications and how to take a psychiatric history, but what I will remember most are the interactions I had with patients, one of whom said the above quote to me. I didn’t know whether to believe her at that stage of her treatment because she seemed so … normal, and yet, the psychiatrists said otherwise. Discussions with the doctors and nurses gave me new appreciation for the subtlety of diagnosing and treating psychiatric diseases.  Sometimes, the patients were clearly and acutely ill; more often, their mental illness was made manifest by social dysfunction. I’m interested in exploring other branches of medicine, but psychiatry is such a rich field that I can’t wait to be part of in some professional capacity.

2. No Internet = no problem
Well, that’s not exactly true, since I did have some limited Internet and it was a bit of a problem. Still, since my apartment in Frankfurt didn’t include wifi (something I hadn’t considered asking about first, lesson 2b), Gail and I made due with a computer internet USB stick that had us frugally counting megabytes. I checked my email “only” twice a day and didn’t video chat with anyone for the entirety of my stay. Having gotten so used to Google hangouts/Skype/FaceTime over the past year, it was nice to realize that they weren’t the sine qua non of my long-distance relationships. By the end of the five weeks, we weren’t itching for the Internet at all!

I think I’ve lapsed, but at least I know it can be done?!

3. Watch your wallet!
I was pick pocketed for the first (hopefully last!) time this summer. Very luckily, I ended up getting everything back because I noticed the theft right after it happened (strange circumstances). In that initial moment of shock and panic, the loss felt like such a violation. Since then, I’ve been more attentive!

4. Fan mail exposes the illusion of separateness
Simon van Booy is one of my absolute favorite contemporary writers, as the -arkies and other friends can tell you. His literary style is ideal for poetry lovers who prefer prose, with incisive metaphors and characters that make me stop in awe of life formulated with such insight.

His novel The Illusion of Separateness was one of my most anticipated reads of the summer, and in preparation, I reread his previous novel (that deserves a whole blog post. Note to self) and a collection of his short stories. I’m a fan, ok?!?!

In June, I e-mailed SvB about how much I appreciated one of his characters in particular, generally fulfilling all stereotypes of zealous fan mail. Less than a week later, HE WROTE BACK!! It was short, but personalized and kind, and definitely a highlight of my summer.

I’d say that the primary lesson from this was to read SvB’s works. 🙂
Secondly — even more so than countless cold emails or statistics about the rise of social media — I realized how powerfully connected we are these days. Whom to reach out to next…?

5. Sometimes, there’s no going back
I visited Hong Kong for the first time this summer, the place where my mother was raised. She hadn’t been back since she emigrated 40 years ago; her HK was the one before the massive boom in Asia, prior to the Handover of HK to China from Britain for that matter. Even as she cited those changes as reasons for staying away, it was hard for me to understand why she wouldn’t want to return to her former home. Now, I’m not sure we really saw her home anyway, or if that’s even possible anymore. The HK I got to know was a packed modern city with impressive skyscrapers packed like tetris shapes, bustling with people constantly on their electronic devices. It’s hard to imagine that almost none of that was present when she lived there. It was unsettling to put myself in her position: my hometown still looks pretty much like it did when I was growing up; Budapest, like much of Europe, has me accustomed to ubiquitous centuries-old buildings and structures, even if they house modern operations. The past is inherent and recognizable in my environments. However, her apartment building no longer exists; we went to her school and university, but they look totally different now, too.

The places I have left might not see such drastic change in the coming decades (or maybe they will, who knows?!), but if/when I do go back, maybe all I can hope to recognize is a memory. 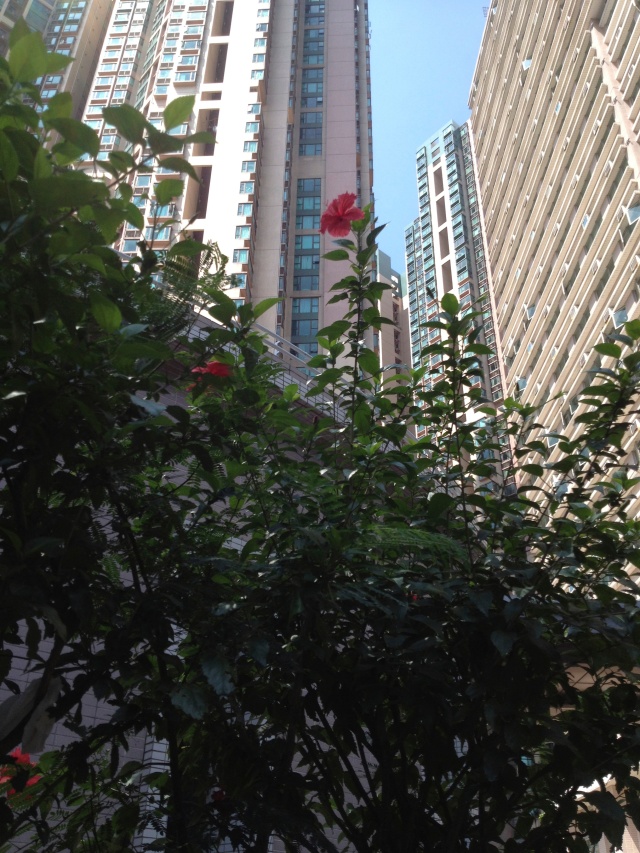 My mom instantly recognized the hibiscus near the HKU campus, but not those newly erected high-rises in the background.

It’s been a nonstop, hectic 9 (only 9!) days since I left BP for Frankfurt. As Jarkie noted in a previous post, I was without Internet for a while. — Nothing like total disconnection to make me realize my dependence on e-mail and search engines. My Internet is still very limited here, since setting up temporary access has proven quite the challenge, but it’s nice in a way not to be interrupted by the regular pings and beeps of iThings. As I type this (offline, to be posted later), I’m looking out from the 15th floor of my apartment building to this view of the outer city limits and parts of downtown. 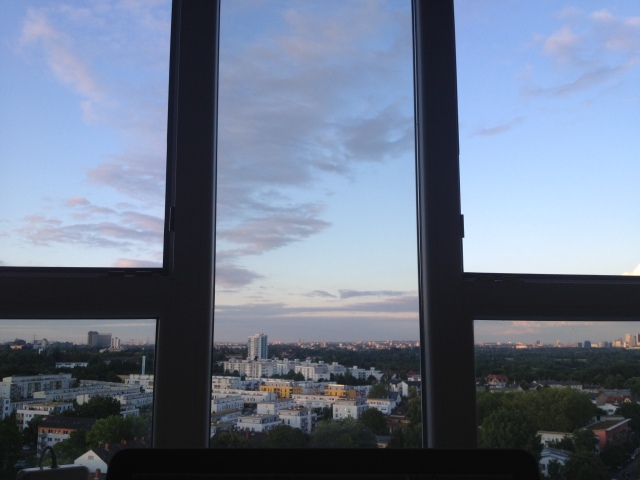 Room with a view!

Tomorrow is my first day of nursing practice in a nearby hospital’s psychiatry department. One of my school’s requirements is a 4-week hospital stint learning about basic clinical care. I’m looking forward to hands-on learning and meeting new people, though I’m trying to keep my expectations low, given that, at this stage of my training, this applies to me in the hospital hierarchy:

That One Thing. Todaycommai details the daily adventures of four youthfully aging friends: Charkie, Arkie, Jarkie, Markie. We met in our freshman dorm at college (go Blue Devils!). Now that we’ve graduated, we’re all over the place, but the friendship lives on! Feel free to browse the different categories and let us know if you have any questions! :)