Happy Monday, y’all! It was a balmy day in Budapest and an end to a stressful stretch of student life.

Despite what I wrote last time about having evenly spaced-out exams, I spent the weekend studying for today’s biophysics midterm (written) and biochemistry exemption (oral). I had known that the biochem exam was approaching, but I only got the exact date at the end of last week … not that there would’ve been much point in extensive preparations, anyways. The exam covers topics of medical biochemistry/molecular bio spanning all three semesters of the course, and I figured I would either know it from previous classes or not. If not, I should probably learn it 🙂  In fact, I was pretty sure that I was heading headfirst into failure, but I’d regret not testing myself. This is a classic Charkie move, though — getting stressed about something I’ve chosen to do that’s in no way required. I’m a big believer in living at the edge of your comfort zone and getting comfortable with discomfort, but I’ll be the first to admit that this has led to more than my fair share of horrendously cringe-worthy moments. Sometimes a stupid or embarrassing thing I said or did in the name of boundary-pushing will pop up and dominate my thoughts until I override it. 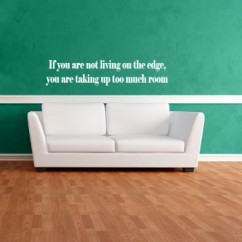 Bella Union café at Duke had this saying on their wall, and it’s one of my favorites. Unfortunately, the edge is a precarious place to stand.

So, this is all to say that my trepidation today stemmed more from looking like a fool than from failing. Even though there are plenty of other students (former pharmacists, for example) who probably know a lot of biochemistry, only two of us showed up at the appointed time and place, and I think the other student was about as well prepared for what was soon to happen as I was (inadequately, to put it mildly). We were both examined in the same room by three professors, first her and then me, who asked a series of general medical biochemistry questions. They did not expect us to remember detailed enzyme names or cascades, just overarching concepts that any physician should be aware of, so it was all perfectly fair. They even kept their facial expressions relatively neutral despite some of the absurd statements we uttered. (Much to my annoyance, however, one of the professors only looked at and addressed the other student the entire time. I’ve been treated so well here in terms of being seen for ME rather than for my wheelchair that I’d forgotten what that felt like.)

My questions included: What is the role of glutamine in the body? Describe the compartmentalization of fatty acid metabolism. What is the mechanism of thrombin in hemostasis? How does insulin regulation work?

My answers included a lot of “uhhhhhhmms”.

Though I hate the feeling of failure, I am looking forward to getting a better grasp of these topics (which are fascinating as well as essential for the educated physician!). Also, it gives me more time to bond with my classmates in our labs. All in all, I wouldn’t take back today’s experience, though I’d gladly leave a little of the embarrassment behind.

4 thoughts on “Today, I fell over the edge.”

That One Thing. Todaycommai details the daily adventures of four youthfully aging friends: Charkie, Arkie, Jarkie, Markie. We met in our freshman dorm at college (go Blue Devils!). Now that we’ve graduated, we’re all over the place, but the friendship lives on! Feel free to browse the different categories and let us know if you have any questions! :)